After completing some relatively difficult projects and wrestling with adding  4 shafts, expanding my Ideal Glimakra loom to 8 shafts, I decided to try a set of “easy” twill towels.  I browsed through 8-Shaft Patterns , edited by Carol Strickler and noticed that there were several variations of twills threaded in an 8 shaft straight draw and decided to explore the possibilities.

First I decided on color and design and got started.  I chose turquoise with green stripes, sett at 18 EPI. The width in the reed was 22inches.  I wove the towels to 33 inches plus allowance for hems.

Plain Weave is always a good place for me to start, just to see what the overall color effect is.  The result was as expected.  Then I tried #2, #13, 327 and #29.  I discovered that not every pattern looks good on both sides.  I also discovered that I hadn’t checked for floats.  There were a few with 4 thread floats. I wasn’t sure that was going to be acceptable. When I took the towels off the loom I wasn’t happy at all and then remembered that it is really not possible to evaluate the results without wet finishing.  They actually turned out satisfactorily.

After finishing the turquoise towels, I wanted to see if it would be possible to tie on a second set.  One might think that is easy, but I had not tied the first warp onto the back beam. I had looped a rod through to attach the warp.  I didn’t know how to tie on to slipping threads.  It was suggested at a meeting (Thank you Jackie Hervey) that I try to stabilize the first warp by weaving a short section in front of the reed, allowing enough thread length to complete the tying process. It worked beautifully and a second set of yellow striped towels was secured. Due to the difference in yarn grist, I decided to re-sley to 20 EPI.

I decided to try #21, Brighton Honeycomb for the first towel.  It gave a nice texture (with some really long floats).  The finish was satisfactory.  Doubting further experimentation, I wove off the 3 remaining towels in plain twill and was really quite pleased.

My final notes to self are as follows.  First, I should sample.  I should also use Fiberworks to check things like floats and back of fabric view.  I also decided that while a straight draw “looks easy”, the patterns that can be achieved are somewhat limiting.
Posted by Ingrid at 8:37 AM 1 comment:

I hosted my first Not 2 Square group meeting this August. We gathered in my studio, a workshop addition my husband and I had built onto the back of our detached garage, where I debuted my latest project: two tea towels and ten napkins. The yarn and instructions were from the Organic Cottolin Tea Towels: Eight Woven Twill Towels  kit by Halcyon Yarn. I was lucky enough to win the kit at the Halcyon Yarn booth at Convergence 2018 in Reno. I chose the Peacock colorway which consisted of 4-1,550 yard tubes of 2/8 organic cotolin in peacock, teal, magenta and lime, and the pattern by Michael Patterson for Halcyon Yarn. I followed the warp color guide, wound an 8-yard warp and dressed my 8-shaft Baby Wolf loom at 20 epi with the threading provided, which was based on a four-thread herringbone draft. After weaving two towels I decided they looked good in my studio, but I didn’t need eight tea towels out there. What I could put to good use would be napkins. I was able to weave ten unique napkins by varying the treading and weft colors and I am pleased with the result. The cotolin, 60% organic cotton and 40% linen, was a little rough on the tube and shed a bit while weaving, but the finished items have a lovely hand. When washed in warm water in the washing machine, hung to dry and pressed with my 35-year-old Elna clothing press, the cotton bloomed and the linen relaxed. The fabric length was cut apart, edges stay stitched, and items hemmed by hand.  There was a 15% draw-in and shrinkage so the finished napkins were a touch over 17” x 17”. I would definitely weave with the Halcyon Yarn cottolin again.

Highlights from the County Fair

The Local County Fair has come and gone.  The weaving and spinning entries were amazing as usual.  Many of the Not 2 Square members entered beautiful pieces again this year.  Here are the highlights.

Betsy captured the People's Choice award with a beautiful shawl made from hand-dyed tencel.

Diana garnered an Honorable Mention with her bright and fun turned taquete towels made with 10/2 and 8/2 cotton.

Ingrid submitted a shawl woven from Madeline Tosh merino yarns.  This was woven in an 8-shaft extended twill pattern.

Jeanne won a second place ribbon with this elegant hand towel.  She wove it with 40/2 Normandy linen with Lanis Valley Linen as the pattern.

Mardi's show stopping shawl was woven in plain weave with rayon chenille.  It feels as fabulous as it looks.

Sue R. woven a colorful table runner from the warp left over from last year's demonstration project.  She used bleach to remove color from black yarn for the weft.  This inventive piece was a first place finisher.

Sue V.'s yardage entry brought her a second place ribbon.  This cotton piece woven in a twill design used a variety of yarns from Sue's stash.

We are starting to look ahead to what we will be weaving for next year's fair entries.
Posted by Ingrid at 10:02 AM 2 comments:

Reflections on my Plainweave Boucle Towels by Mardi Naythons

The inspiration for these towels came from an item in Jane Stafford’s studio, using similar colors.  From there, I decided to work on gradation, using Fibonacci sequences and division of space. 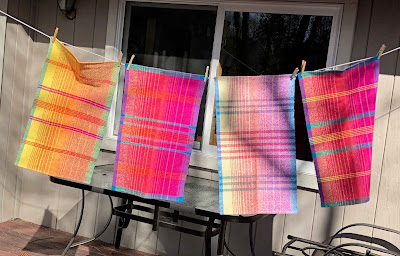 The warp was made up of Boucle cotton and 5/2 cotton, which I wound together so that most of the time the boucle threads weren’t adjacent.  I also tried to use gradation in changing colors. 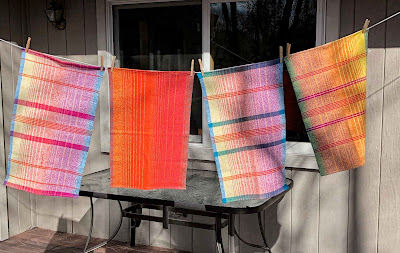 As I wove, I changed the weft colors as I went.  I had a basic plan, but I let the colors be my muse.  There were a few surprises along the way, for example, I had never considered using white in the weft, but it worked well.  Also, at the end of the warp, I decided to just use straight orange rather than putting in stripes.  It turned out that there was enough to make a towel, though it was slightly shorter than the others and I really liked it. 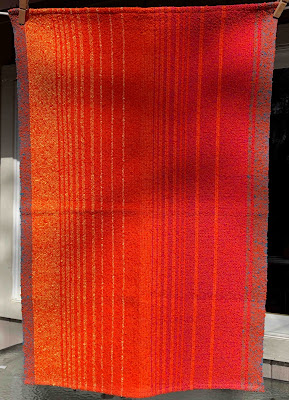 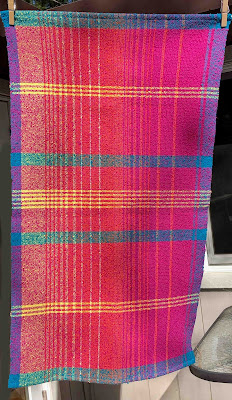 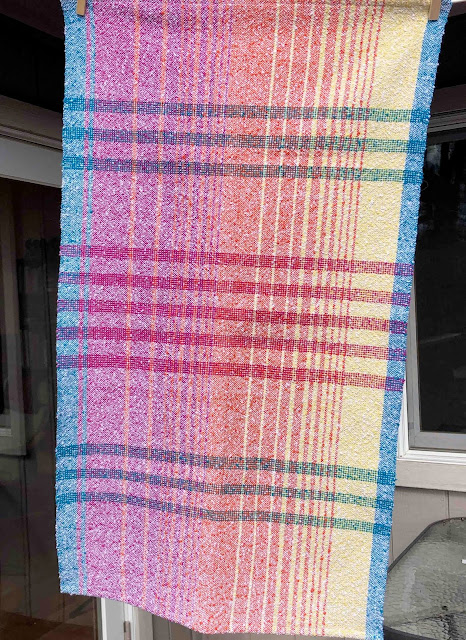 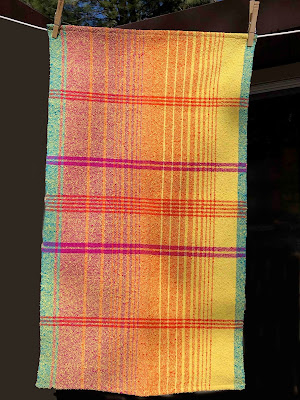 The Last of the County Fair Entries

Diana and Ingrid are the two remaining Not 2 Square members with Fair entries this year.


Ingrid entered eight items:  Two scarves, two shawls, two towels, a scarf made using a friend's handspun yarn as the weft and a scarf for the Nevada County Inspired category.

Congratulations to all of our members who entered - ribbons are not, they are all winners.

More from the County Fair

Jeanne, Eileen and Betsy are our next three entrants to be showcased here.  Jeanne entered two scarves.  One was made starting with a painted warp.  The second used Theo Moorman techniques she learned in a workshop this spring.

Eileen had an indigo-ikat dyed warp that she used for her Nevada County Inspiration entry.  She also entered another shawl, a scarf and yardage this year.

There are few more people we will show off in the next post.

The next two members' entries we would like to highlight are from Mardi and Marcy.

Marcy also entered two items: a scarf and a towel.


There will be more members entries later.
Posted by Ingrid at 11:14 AM 2 comments: